I wish they'd built a decent hunting mini game into it, it doesn't really seem to matter what weapon you use, it still takes half a dozen shots to drop a bear. Would have been nice if things like heart/lung shots were a thing, more like The Hunter.

Totally agree re the interruptions, having a quiet moment of fishing next minute random cultusts are in the next field shooting into the air, it's annoying as hell.
0 x

So far the worst part is how i'll be halfway across the map to a destination then BOOM cutscene and "fuck you brah, you're back at base for no reason".
0 x
steamcommunity.com/id/krautpants
Top

I'm enjoying the game so far (about 25% in) I think it's better than 3 or 4; seem to be less cut scenes though they are annoying but the fast travel helps resolve those teleport issues.
The crafting is less painful than previous (ie you don't need a spotted dingo pelt for that antique quiver you never wanted) so you don't waste time travelling across the map for things you can just buy them at the shop and there seem to be plenty; the perk system seems pretty fair and plenty of inventory space

I'll have to give the controller a go as the vehicles are terrible with K&M.
The hunting could be better if they rewarded you for using the bow and head shots and fishing is fun though as mentioned often interrupted by rednecks though that be a Montana thing lol

The cultists with the super armour are annoying though knee capping them and the rocket launcher seem to be the go.
I expect I'll get to the end of SP.
not sure about MP the lobby can be a lonely experience and some of the user created maps are pretty rank. the coop looks to be rather annoying/bugged so I doubt I'll bother
0 x

I'd still like to know wtf they were thinking with the weapon progression... there's basically 2 of every weapon that perform the same then skins for each.
0 x
steamcommunity.com/id/krautpants
Top

I think because there is much cross over between sp and mp (ie the perk system) that they wanted the weapons to be uniform in mp;
but I agree that the weapon progression is lame and they could have split that between mp and sp.
Last edited by brimlad on 05 Apr 2018, 21:24, edited 1 time in total.
0 x

I just don't get why they have 2 m14's and 2 ak's that are functionally identical... its just dumb as hell.
0 x
steamcommunity.com/id/krautpants
Top

What a stupid ending... meh! Great gameplay but the cut-scenes and story line were boring and stupid and extra so with that ending.
0 x

Bicketybam wrote: ↑
06 Apr 2018, 01:57
What a stupid ending... meh! Great gameplay but the cut-scenes and story line were boring and stupid and extra so with that ending.

The cutscenes kill me, I end up skipping them for the sake of getting back to the action, only to find I'm halfway across the map again
0 x

cut scenes have been rubbish but at least you can skip them, which is sad cuz they probably eat up a fair chunk of the budget in making the game which could have been better spent on a decent mp and a good hunting mini game.
0 x

brimlad wrote: ↑
06 Apr 2018, 11:09
cut scenes have been rubbish but at least you can skip them, which is sad cuz they probably eat up a fair chunk of the budget in making the game which could have been better spent on a decent mp and a good hunting mini game.

They really should have had real hitboxes etc, i could JUST hunt in that game.,
0 x
steamcommunity.com/id/krautpants
Top

I decided to play again on hard and while I'm trying my best to ignore the story and focus on side quests first, you still get sucked in by "bliss" bullets and forced to play the storyline *sigh*.

That said and I really wished I'd got a recording of it as I found a fisherman/shop at this small lake in Jacobs region that said to me when I approached... "Hey, I could have been a Deputy like you... until I took a bullet to the knee!"

First time I've heard that in this game and that joke is never going to go away.
0 x

brimlad wrote: ↑
06 Apr 2018, 11:09
cut scenes have been rubbish but at least you can skip them, which is sad cuz they probably eat up a fair chunk of the budget in making the game which could have been better spent on a decent mp and a good hunting mini game.

They really should have had real hitboxes etc, i could JUST hunt in that game.,

I actually killed a bear with a single arrow to the head yesterday so I'm wondering if there might be a small hit box on the head, haven't repeated that yet though but I'll keep trying and caught my first paddlefish that was good fun;
running about barefoot with my bow, m79 and revolver the m79 is so much fun and my primal outfit is so Montana, not sure if everyone gets that as a club perk or just if you own FC primal.

done and dusted 25 hours of good fun, final battle was a tad weird but that's nothing new. and I can still go fishing and hunting in peace and tranquillity without them damn peggies interrupting a peaceful evening... amen

No doubt I'll get this when it's on sale for $5-$10 like all the others and love it - still waiting for Primal to go down in price first though.
0 x
Top

Primal is good though you do get eaten by the wild life a tad often, keeps you frosty though; the crafting is a rather annoying the FC5 crafting model is much better

on sale is a good option, both games are fun !
0 x

discovered the Joseph Seed nature trail which has some stunning views of Hope county and a few good fishing and hunting spots; bagged a couple of Turkeys and Bison just to name a few and definitely enjoying being able to roam about Montana without them dumb peggies spoiling a good spot of fishing or hunting... good times

The nam dlc was good fun, the extensive underground tunnel network was a nice addition
0 x

Welcome to Mars...
just out walking my node pony and good ol' Hurk teleports me up to Mars to save his arse from a bunch of arachnids and he knows I hate spiders...

good fun.. the low gravity and gravity belt make for some interesting combat manoeuvres and a beautiful night sky and plenty of spiders to kill... who would have thought spiders on mars

apologies to jason, I was already cooping so couldn't accept your invite yesterday arvo but happy to coop anytime.
It's actually pretty good if you have done the campaign and just play as the sidekick. You keep all your gear, cash and perks from your campaign though you can't loot bodies,that is the hosts prerogative, but you can pick up amo and gear. you can earn cash from hunting and fishing which keeps you in bullets and stuff.

about 1/2 way through Mars and having a great time with it. the DLC has been pretty good probably the best offering in the franchise so far.
the nam experience was pretty good especially the underground tunnels. 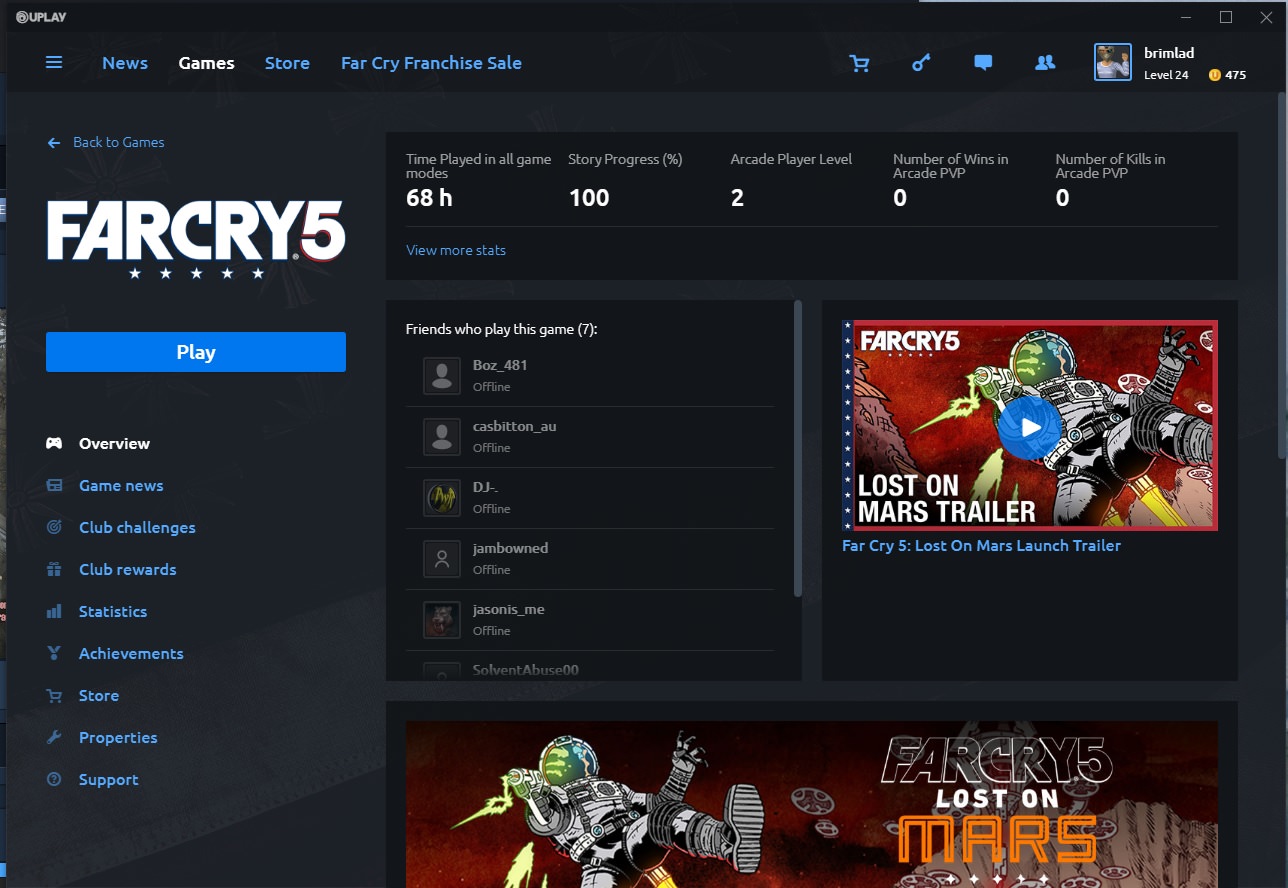 Finished the Lost on Mars DLC and it was a pretty good campaign. some of it was quite challenging with a mix of puzzles and gun fighting and the low gravity and gravity belt made for some fun combat.
One thing to note is before the final boss battle it is worth cashing in your collected energy cores for cash and buy up weapons as those weapons can then be used in the coop, mp and campaign modes ( make sure you keep one energy core to power up the teleport)
It is worth completing all the elements as some may look fairly innocuous but turn out to be great fun.

the Zombies are returning to FC5 August 28... looks pretty good and I can't wait to kill some zombies and zombie dogs and probably a whole raft of mutants... Montana what a place

the zombies have arrived

pretty good the way they have fleshed it out, essentially 7 different stories based on fictitious movie scripts each unlocking as you progress through the stories, weapon slots also unlock as you go deeper into to each story. Also some sort of challenge mode that I haven't unlocked yet and coop for both the story and challenge modes.

Ugly critters too and just a tad to friendly, you know those cuddly types that just want to pick at your brains... found a good use for the tractor a bit like farming simulator but with zombies

Restarted this on the weekend to try it..yep, save status has reset back to the starting island. I'm done.
0 x

It's unfortunate that the game isn't working for you Disco; there was a major patch (7gb) that was released on Monday which has fixed a few things; I was getting a few crashes using sli in coop mode and that seems to be fixed.
might be worth trying it one more time that patch may have helped.

Patch added a new game mode for those that have completed the campaign so I'm looking forward to adding a few more hours to the 158 I've already notched up.

I've had three goes at it but still haven't worked out how to take it down !

and the shovel launcher is always good fun and very Montana