How's everyone going in the lead up to xmas?

Whilst I'm on leave already, I dunno why I've teed up medical appointments and other stuff on my backlog of appointments. I should just be resting. Physio worked into my calves yesterday so I'm in no mood to be on the go though I suppose it'll get me walking.
0 x

For me it's been pretty uneventful. Got a whole bunch of nice places booked for my time off (starting tonight, even if I have to work tomorrow), presents are wrapped, most the food is bought (just need a few fresh ingredients on Monday morning), and the wine from the cellar has been chosen. Got an annoying drive down to the coast on Saturday morning, but it's all relaxation after I get back on Sunday*.

*I may have roped myself into volunteering to building a website for someone, and that will need to be done over the break, and I have a job interview to prepare for too, but that's me causing trouble for myself...
0 x

we're heading to Perth for a no stress Christmas lunch at Bluewater where we had our wedding reception and a short walk from my mother-in-laws house and after 20 years of doing the super host shit I must say it is very refreshing... a week of chill and minecraft and a bottle of Aguardente de Medronhos

third year have done the trip west for Christmas and much love to the folks that work Christmas day, it makes an old man like me's life just a tad easier.

I did bake a Christmas cake to take west, 1/2 kilo of rum soaked dried fruit and 250gr of marzipan, wicked cake 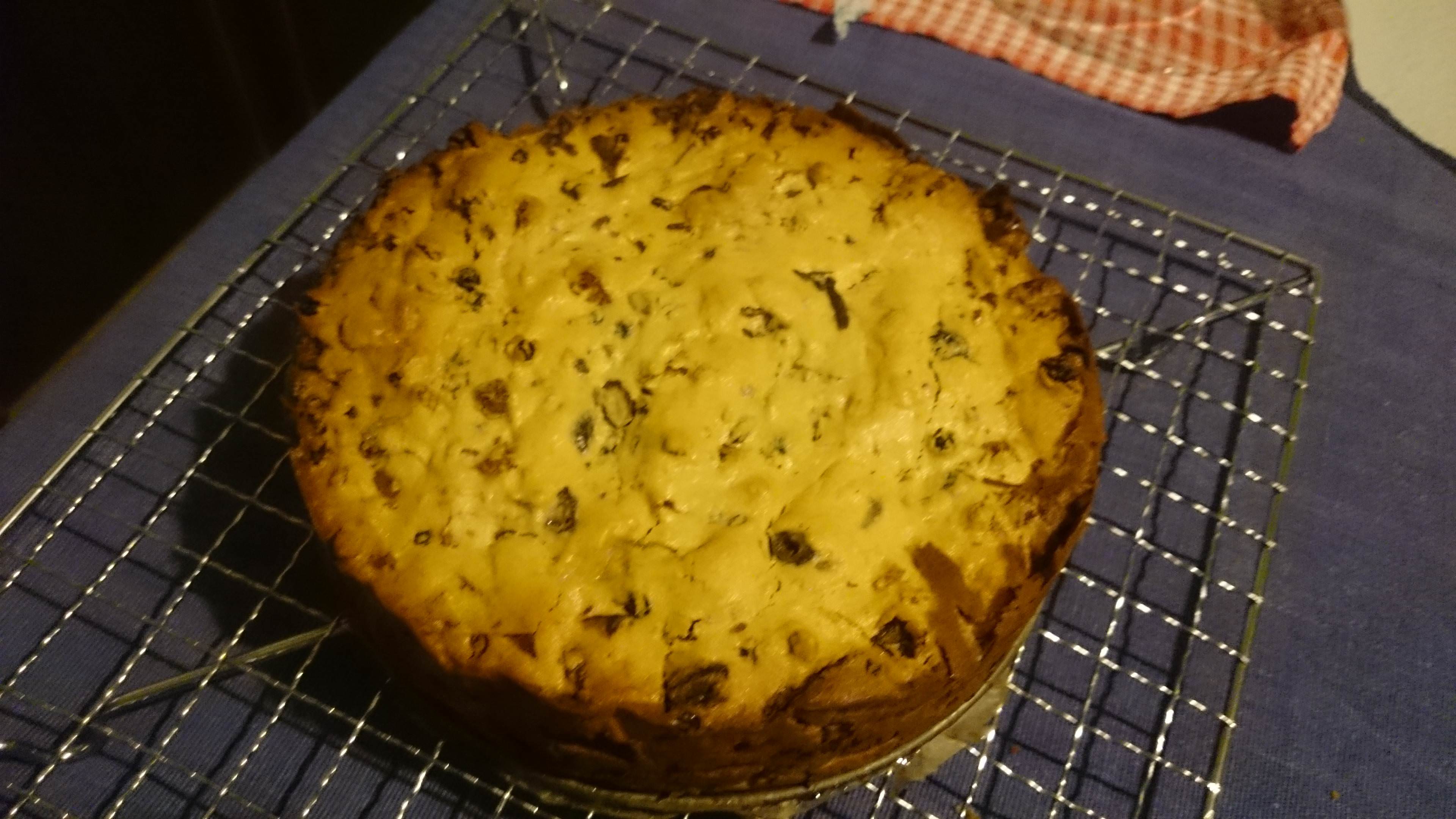 Send me a piece please
0 x

That's an inviting looking cake brimlad (and I don't mean in an American Pie kind of way). The rum may actually help Disco's sore throat - lol

Hope your sore throat goes away quickly Disco and hope you don't stress too much about the job interview storm.

I've just completed my 4 weeks of $50 shops at Woolies so have got a nice $50 worth of credit to use at my next shop. Though, I'm all stocked up to get me through to xmas/boxing day before I need to go grocery shopping again.
0 x

I don't stress about the interview - I'll stress if I get the job because it's a very different sort of gig to what I'm used to.

I know what you mean. There's a few jobs I've seen where it's in line with my quals and skillset but just applied in such a way that would really challenge me at the moment. With all the body corp/building rectification stress I have to deal with atm, I'll pass on the extra stress from another source.
0 x

Part of the issue for me now is that I really hate working in Government IT - it's so process heavy and (internally) political that to get anything of value done is an exercise in futility. Or maybe I'm just a cynical arsehole who, as a previous manager put it, "hates accountability" and "is unwilling to improve". Either way, I'm looking for a change, so getting out into the private sector doing a different kind of job is an exciting prospect - even if it's a different kind of thing and I'm probably unqualified for it. Guess I'll find out on the 9th...
0 x

Last work day of the year today, seriously struggling.... did a job on myself at Disco's Christmas Party last night, annoyed the shit out Neko when I got home and I'm pretty sure I was still intoxicated when I arrived at work this morning. Urge to vom arrived around noon. Jesus fuck, I just want to nap.
0 x

AND YOU DIDN'T WANT TO LEAVE, I MADE YOU LEAVE (actually I was just leaving, she's tough enough to look after herself)
0 x

Should be getting close to holiday time for those of you working today. Hope you've got a nice cold beer in the fridge waiting for ya!
0 x

I don't, but I do plan on seeing if lillet blanc makes for an acceptable substitution for red vermouth in a negroni.

We have beer. Last thing I feel like is booze tho lol
0 x

Even if it doesn't, I'm still going to drink it.

Could always make a vesper instead

CherryRed wrote: ↑
21 Dec 2018, 13:09
annoyed the shit out Neko when I got home and I'm pretty sure I was still intoxicated when I arrived at work this morning.

Come to Cairns next year, bring me one of those....

Merry Christmas mofo's I'm on a two week social media holiday and I do consider this place very social, have fun and be kind

Enjoy your time off. Wish I could do the same, but addiction is a blessing and a curse.

The negroni does not work if you substitute lillet blanc for red vermouth. It's not sweet enough and somewhat perfumey, so you end up with a bitter perfumey mess.
0 x

Sounds like the alcoholic equivalent of that chick who hits the town looking for a rebound guy after several drinks.
0 x

Just finished my first meal of the day. Spent the morning sleeping in and occasionally getting up to use the computer... didn't feel hungry at all.
0 x

Mmmm most tame xmas party ever, still had 3-400 left on the tab at the end of the night.... be a shame if a couple of people just blew the rest of it on bottles of wine to take home...
0 x
steamcommunity.com/id/krautpants
Top

Finding a restaurant to dine out at on Xmas eve has been a pain in the arse... all my usual local eateries are closed (one is also sadly relocating... hopefully they'll be closer to me). Need to dine closer to the city. It's gonna be a seafood dinner.
0 x

As the poor bugger who often had to fix stuff that had been done outside the processes*...

When processes are set up properly - in the right way, for the right reasons - they shouldn't add more than about 10% overhead
MOST of the time the process and documentation aren't really needed - winging it works
But when things go west
- if you followed the process and have the documentation - then fixing things is made much easier because you know exactly what was done in what way
- not following the process, or having no documentation, means that you waste way more time than you ever saved, because you always have somebody who wants to waste time trying to "fix" the problem without quite knowing what it is, and then you end up having to start from scratch and reinstall and re-test everything anyway

That said - sometimes the processes exist purely for process sake - because somebody has a KPI to achieve, or an audit report once said they should implement ISO 900x or ITIL or... ... ... Those processes ARE a waste of time

*I finally resigned when the fourth project in a row set a timeline for completion before they had actually run up a development system to see what sort of time it would take and what problems they would encounter. Each of the three previous projects had failed to meet go live dates on one or more occasions - and had very little documentation of what had been done along the way to fix problems in the previous instances. I identified the risk that I might leave, when they were creating the risk register, they didn't even bother to record it because they weren't really trying to identify risks - they were just ticking the box that said "create risk register"
0 x
Top

I get why process is in place, and hearing about some of the things that were done before any form of change control was put in place, I can see why some people find it important. But in my years of experience in government IT, I see the change management getting more intrusive and more process-heavy. It involves more paperwork and more executive approval for even the most minor of changes, takes days to implement, and applies to more and more environments so that even getting something into test requires knowing how to navigate a bloated bureaucracy.

Or worse, it is an interplay of sections that don't have any skin in the game, and outside corporations that are contractually obliged to do work in a particular way. The interested parties (the business and the IT team delivering the business value) have little-to-no say in how we can deliver or manage risk.

(I'll quickly add that one reason I think this is the way is the public service is very risk adverse as a general rule, so anytime something fails, the process is amended to make sure whatever step was "missed" is now covered for the future - thus making the process more unwieldy as time passes. Then when the whole thing becomes a bloated mess and it gets a radical overall, there's a "design by committee" approach done by people who are trying to make a one-size-fits-all process that tries to check off all the risk management boxes - from an organisational perspective - with little to no regard or even acknowledgement of how it's going to play out on a day-to-day basis. The important thing is at the end of the day, someone's arse is covered for when this Kafkaesque nightmare causes its own issues...)

"they shouldn't add more than about 10% overhead"
Even the best departments I've worked in don't get anywhere near that. The worst ones require having someone dedicated to managing that aspect of software delivery - and I'm talking even in lower environments. And the timeframes (let alone the amount of effort) make a mockery of the use of the words Agile and DevOps that I keep hearing used very loosely (and without any sense of irony) in the hallways.
---
What I mean by process, though, isn't just those formal change management procedures. It feels like all aspects of the job are under implicit contracts of responsibility, which sets the boundaries of what can be done, who does it, and when it has to happen. These mirror APS levels. The teams where there's a flat APS rating, or is mostly contractors, are better to work in because then the hierarchy doesn't play much of a role.
0 x

We did our family Christmas lunch on Saturday, so psychologically it already feels like after Christmas, and I'm now somewhat distressed because there's no cricket on TV yet.

Return to “The Water Cooler”